The selection of candidates for admission to the 2015-17 batch of the PGP at IIM Ahmedabad is a two-step process.

Candidates fulfilling the following minimum cut offs in CAT 2014 percentile ranks and Application Rating (AR) scores given in Table 1 and obtaining a positive (greater than zero) raw score in both Verbal and Quant Sections will only be considered for all subsequent stages.

For computation of AR score of an applicant rating scores A and B and C ( Table 2) will be computed based on her/his percentage of marks obtained in 10th standard, 12th standard and bachelor?s degree examinations respectively.

Notes about the marks obtained:

To recognize exceptional performers across diverse academic backgrounds, from each of the five categories of academic disciplines, top 50 candidates or top 1% of the number of applicants to IIM Ahmedabad ? whichever is less ? will be shortlisted for AWT & PI on the basis of their CAT percentiles. For the classification of academic disciplines, refer to Table 3.

Based on the CAT percentile, from the remaining candidates of the pool meeting the minimum cut offs, and minimum AR scores prescribed in Table 1, a merit list will be drawn and shortlisted for AWT & PI for General category and for the reserved categories separately.

Table 3: Discipline for bachelor?s degree (as per CAT Application). 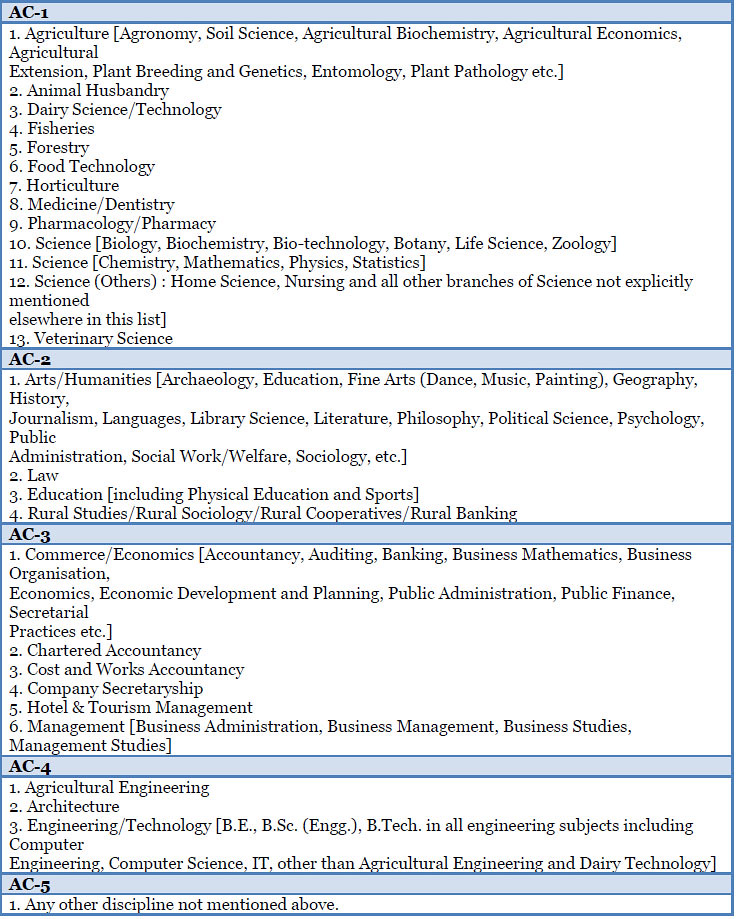 Note: Final discretion on the academic category that an academic program will be classified into rests with the Admissions Committee of IIM-Ahmedabad.

Selection at this stage will strictly be based on the ranks of the candidates computed separately for each category (General/SC/ST/NC-OBC-Transgender/DA) on the basis of their Composite Scores (CS). The numbers selected in different categories will be in proportions mandated by law.

The CS of a candidate who appears in AWT & PI will be computed using the following rule:

First, CAT, AWT and PI scores of a candidate are normalized by dividing it with the corresponding maximum possible score that could be obtained.

The CS of a candidate is then obtained as:

The following information is about the admission process followed by IIMA for its PGP subsequent to CAT. It is therefore, important for the candidates to read them carefully.

NOTE:
In the event of specific guidelines being issued by Government of India, IIMA reserves the right to, depending on the nature of the guidelines, continue with its AWT&PI as stated above OR use an alternative selection procedure which may include calling for additional information from short-listed candidates, a supplementary test or any other suitable process/mechanism. Care will be taken to ensure that candidates are not put to undue inconvenience.